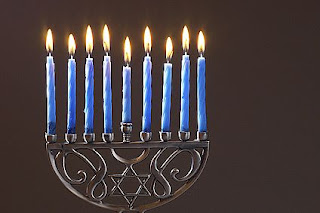 From the First Book of Maccabees:

And after that Antiochus had smitten Egypt, he returned again in the hundred forty and third year, and went up against Israel and Jerusalem with a great multitude, And entered proudly into the sanctuary, and took away the golden altar, and the candlestick of light, and all the vessels thereof, And the table of the shewbread, and the pouring vessels, and the vials. and the censers of gold, and the veil, and the crown, and the golden ornaments that were before the temple, all which he pulled off. He took also the silver and the gold, and the precious vessels: also he took the hidden treasures which he found. And when he had taken all away, he went into his own land, having made a great massacre, and spoken very proudly. Therefore there was a great mourning in Israel.

For it was a place to lie in wait against the sanctuary, and an evil adversary to Israel. Thus they shed innocent blood on every side of the sanctuary, and defiled it:  Insomuch that the inhabitants of Jerusalem fled because of them: whereupon the city was made an habitation of strangers, and became strange to those that were born in her; and her own children left her.  Her sanctuary was laid waste like a wilderness, her feasts were turned into mourning, her sabbaths into reproach her honour into contempt.  As had been her glory, so was her dishonour increased, and her excellency was turned into mourning.  Moreover king Antiochus wrote to his whole kingdom, that all should be one people, And every one should leave his laws: so all the heathen agreed according to the commandment of the king.
And drove the Israelites into secret places, even wheresoever they could flee for succour. Now the fifteenth day of the month Casleu, in the hundred forty and fifth year, they set up the abomination of desolation upon the altar, and builded idol altars throughout the cities of Juda on every side; And burnt incense at the doors of their houses, and in the streets. And when they had rent in pieces the books of the law which they found, they burnt them with fire. And whosoever was found with any the book of the testament, or if any committed to the law, the king's commandment was, that they should put him to death. Thus did they by their authority unto the Israelites every month, to as many as were found in the cities. Now the five and twentieth day of the month they did sacrifice upon the idol altar, which was upon the altar of God. At which time according to the commandment they put to death certain women, that had caused their children to be circumcised. And they hanged the infants about their necks, and rifled their houses, and slew them that had circumcised them. Howbeit many in Israel were fully resolved and confirmed in themselves not to eat any unclean thing. Wherefore the rather to die, that they might not be defiled with meats, and that they might not profane the holy covenant: so then they died. And there was very great wrath upon Israel.
Now therefore come thou first, and fulfil the king's commandment, like as all the heathen have done, yea, and the men of Juda also, and such as remain at Jerusalem: so shalt thou and thy house be in the number of the king's friends, and thou and thy children shall be honoured with silver and gold, and many rewards.  Then Mattathias answered and spake with a loud voice, Though all the nations that are under the king's dominion obey him, and fall away every one from the religion of their fathers, and give consent to his commandments: Yet will I and my sons and my brethren walk in the covenant of our fathers.  God forbid that we should forsake the law and the ordinances.  We will not hearken to the king's words, to go from our religion, either on the right hand, or the left.
Posted by Brad Birzer at 8:19 PM

Email ThisBlogThis!Share to TwitterShare to FacebookShare to Pinterest
Labels: Maccabees